I was dropped off in Meifod by the B&B owners at 8:50 so I knew I’d be ok for the 14:55 train from Welshpool to Shrewsbury. The Cicerone guide reckoned 5.5 hours for today’s stage and I was usually in and around the time they estimated.

The first of only three proper climbs came early on, as is traditional and having adjusted my ‘new’ boots a couple of times, I was feeling strong after a good night’s sleep and only two pints in Happy Larry’s and two cans of cider in my room the previous evening.

About a mile of road followed, which was fine by me and it was a steady blend of a bit of road and a bit of field / stile work. The chaps below took a bit of an interest but I was able to shoo them away. As I think I’ve often overheard people say, nobody talks bullocks like I do. 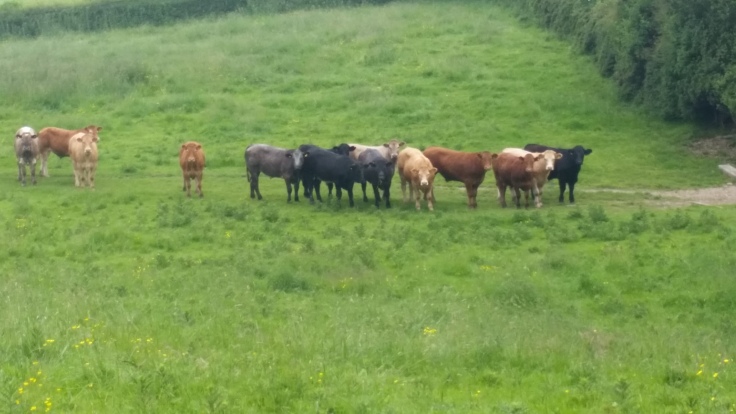 I was making good time and I had a cheeky look at the watch and the route profile. There didn’t seem to be any major obstacles to overcome other than the three climbs. The first I’d flown up and the second was again a mix of track and wooden steps, which make the ascent that much quicker.

There were some very pleasant looking holiday parks in ‘the hidden valley’ and a B&B in an old school building but no birds of note other than quite a few chiffchaff in the woods I passed through.

My ‘heavy’ Meindl boots, that I’d thought were bound to give me blisters, felt a lot more comfortable today. I don’t know if they had ‘softened up’ a bit with a day’s wear or if I’d just tightened them to the optimal level but I’d forgotten all about them, which says everything.

From the distance remaining I knew it was nailed on that I’d make the earlier train unless I got lost or held up badly. I kept the pace up anyway as I was still feeling there was a lot left in the legs and it was only going to get warmer as the day drew on.

After a bit more road, it was the third climb of the day that slowed me down.

It looked like a fairly simple walk up a field by a fence from the guidebook and the OS map and that’s all it should have been. The farmer, however, had decided to sow wheat all over the footpath. In fact, it’s not just a footpath, its also a National Trail. The two photos illustrate the problem.

I’ll raise it with Powys Council and National Trails but what’s going to happen? Probably not much. Councils have pared back staff to the bone and farmers and landowners know they can get away with being, shall we say, ‘thoughtless’?

After fighting my way through the wheat field I had to apply a decent measure of hydrocortisone cream to my legs, which were red raw. I would have put my long trousers on if I’d foreseen the reaction of my lower limbs to the wheat but hindsight, like the next European Championships, is 2020.

By this stage I was entering the boundaries of Welshpool Golf Club, a course I’d played before with unerring inaccuracy. The waymarking was pretty good, so I spent less time looking for the path than I had for my ball on my previous visit. It was surprisingly boggy in places though and I could see no way of clearing one patch other than to take a run and jump – always my least preferred option.

The golf course included the last climb of Glyndwr’s Way, which was steep in places but zigzagged on a nice grassy path to the tryg point on the summit of Y Golfa. You can just make out the outline of the Breiddens in the background of the photo.

It was a nice steady descent off the top from here, through one more field then a solid track all the way down through the grounds of Llanerchydol Hall and I was able stride steadily to the edge of Welshpool and the heritage railway station at Raven Square. 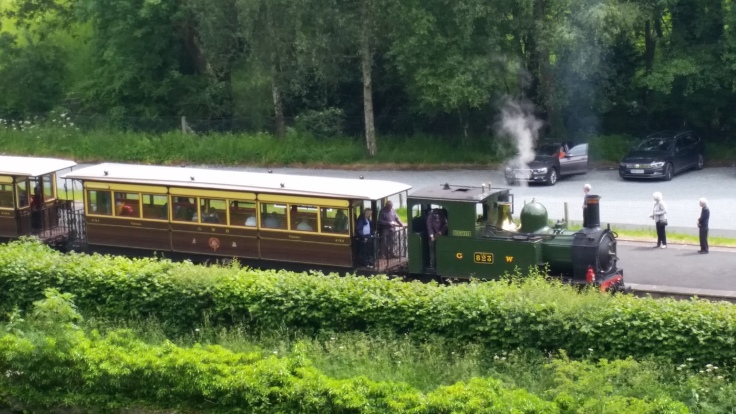 I was on familiar territory now in Welshpool and there was an unavoidable sense of ‘is that it?’ There is a small park with a commemorative stone to mark the finish but there was a young lady eating a sandwich at the picnic table next to it so instead of going down to it I settled for taking a photo.

I had thought I’d have a pint in one of the pubs in Welshpool high street but from previous visits I had yet to find one that I would go back to, especially on a sunny Saturday afternoon. I decided instead that I’d get the train back to Shrewsbury and have a celebratory pint there.

I had covered the eleven miles of the final stage in four and a half hours so was quite pleased with that. There is no doubt that you start to feel fitter and stronger after the first few days. There had been some really tough parts as well in the heat of the middle of the week but it was all over now.

I decided on a pint of Ludlow Gold in the Admiral Benbow for my celebratory pint. It was, as ever, in great condition and as I savoured it I thought to myself, I might do Offa’s Dyke next….