Well, I wasn’t looking forward to it and, don’t get me wrong, I’m glad it’s over but it wasn’t as bad as I thought it was going to be.

I had ordered an early breakfast (7:30) so I could get some miles in before it got hot and I was on the road before 8:30. I had ordered a packed lunch as, although there was a pub en route that was purportedly open all day, I wasn’t taking any chances.

Would the pub still be in  business?

Would they be open at lunchtime?

Would Geoff’s chocolate mousse set before Jon and Greg call ‘time up’?

Sorry – got a bit carried away with the jeopardy there. 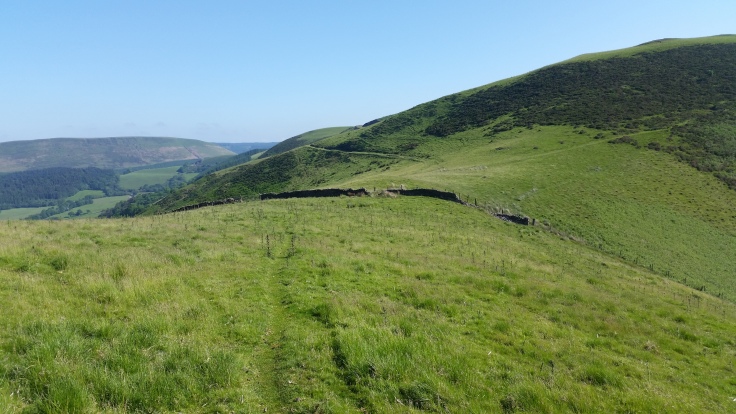 I got the first climb of the day completed and then had the clear, easy green track above to get my teeth into. A forest track followed which was flat, fast and dull. I didn’t mind though – I was just trying to get some decent distance covered whilst it was still cool.

Stan and Ollie had been up to their tricks again. Another fine mess…

After the forest came a first for the week. I finally met people walking the Glyndwr’s Way. A group of five, a mix of South Africans and English, were walking it the other (wrong) way.

A little further down the hill I was able to tick off another first for the week. I heard a curlew calling really close to the path from some pretty open ground. After a minute or two’s searching I was able to locate the bird in question. It was quite small to be honest, much smaller than the one I’d seen on Stiperstones last month. The other concern I had was the number of sheep in the field. They could easily destroy a nest by walking right over it. Anyway, these are the things that go through my mind as I’m walking…

I’ll put you out of your misery. I made it to the pub,  The Cann Office Hotel and it was open – another first for the week. For a lunchtime anyway… Wasn’t a bad drop either.

After feeling strong all morning and covered over half the distance for the day, it was a real struggle after lunch. I don’t know if it was the beer or the chips or if it had just got a bit hotter but it took me a good half hour to get properly going again. Fortunately, after an hour of stiles, mud, nettles and general farm detritus, I had a really good forest road to go at before the now traditional nasty climb to finish the day. This one was particularly severe in places as well.

I think knowing that the profile for tomorrow’s stage was much gentler and that it would only be fifteen miles as opposed to the twenty today gave me a bit more encouragement to get to the hotel, a full nine and a half hours after leaving Llanbrynmair. A cool shower and a few pints of Station Bitter on the hotel terrace overlooking Lake Vyrnwy and all was right with the world.